Allen remembered that after he and Gwen came out of a restaurant in Chinatown, they were attacked by two strange people in the parking lot. Now he knows clearly that this group of vampires had already attacked him.

And Allen deeply remembered that Quinn had a bite on his neck at the time, and now he knew that after being bitten by a vampire, he would be transformed into a vampire!

“Mother Fucker!” Allen couldn’t help but exploded. The bastards still had such a plan.

Unexpectedly, Feith did not intend to cover up at all, and directly said: “Well, I originally wanted you to be one of us, but I didn’t expect that you were not transformed. This makes me very curious!”

Hearing what he said, what can Allen say? Could it be that his physique is different from that of normal people, and his life level is much higher than him?

So just looked at Feith coldly, to see what he wanted to do.

But he did not expect Feith to directly say something incredible to Allen.

“Are you crazy!” Allen looked at Feith incredulously, with the expression ‘do you think I’m stupid.’

Allen didn’t expect Feith to calmly said: “Otherwise I will let Quinn bite Gwen and see if you have a way to keep people from transforming!”

“I’m fucking!” Allen wanted to rush forward to kill Feith in an instant.

But Feith shook his finger and said: “Don’t be impulsive, I have already told Quinn, as long as you dare to move, he will bite Gwen, are you sure you want to do it?”

Allen only felt a suffocation in his chest now, and it felt bad to be pinched by the handle.

Looking at Allen’s appearance, Feith showed a satisfied look, but at this moment, Feith seemed to have suddenly caught sight of something, and looked at the entrance of the underground nightclub with a mixture of surprise and disgust.

The entire dance floor was silent for an instant, and Allen turned his head in surprise. All the vampires were staring at a strong black man wearing a black leather coat, a samurai sword, and a bunch of strange equipment.

And Allen saw an extremely strange scene at this time. The vampire who was hit by a shot, as if being ignited, burned out in an instant, and then vanished into smoke! 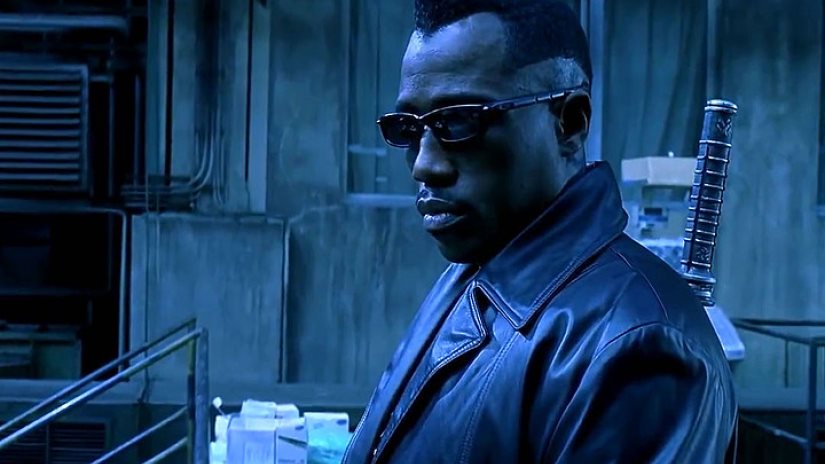 The vampires on the dance floor began to scream in panic!

Like a boulder thrown into a quiet pond, these shouts instantly caused huge waves on the silent dance floor, and the vampires began to commotion.

Some vampires rushed towards the exit in fear, some vampires started screaming, and even some vampires did not know where they took out their guns and started shooting frantically at Blade, not caring whether they would hit their own people.

The entire underground nightclub was in extreme riots.

Turning his head and looking at Feith, who had been threatening him, found that he could no longer take a bite. Under the cover of the vampire behind him, he quickly disappeared into the nightclub.

Seeing this situation, Allen let go of his scruples, and instantly rushed to the turbulent dance floor, looking for Gwen.

Right beside Allen, a vampire was wiped out in an instant!

Blade’s edge came over and looked at Allen with surprise, as if he had confirmed his identity, and coldly said: “Human, you have come to the wrong place, get out of here!”

Allen rolled his eyes and didn’t bother to pay attention to him. What kind of person is the Blade Warrior? Seeing Allen’s attitude, he turned his head and continued to slaughter the vampire.

At this moment, Allen’s ears were amidst the screams, acutely caught a cry of pain!

Allen rushed over in an instant, and even among the blood-stained vampire crowd, he saw Quinn biting Gwen’s neck and sucking Gwen’s hot blood bloodthirsty!

“Crack!” With a sound, Allen broke his neck directly, and he fell softly to the ground.

Allen immediately came to Gwen and hugged her in his arms. With heartache, he saw that her neck was bleeding with blood, and the whole person was struggling on the ground in pain, with a “hehe” moan in her throat!

A healing light appeared on Allen’s forehead, shining on Gwen’s neck. And almost immediately, Gwen’s neck was healed, restored to its original state, and no more bleeding.

But what made Allen panicked was that Gwen, who had recovered her body, was still struggling in pain, suffering to a level of confusion, as if something in her body was stimulating her all the time!

The wall of the nightclub suddenly broke through a big hole, and Harry, wearing Green Goblin armor, flew in on a glider. Harry, who had been ambushing outside, suddenly saw countless vampires rushing out and knew that something had changed inside. So, he quickly blasted the wall and rushed in.

Seeing the blood-stained and hell-like scene in front of him, Harry was shocked, and then the machine gun on the glider began to shoot these vampires frantically!

At this moment, Blade suddenly came to Allen’s side, raised his samurai sword in his hand, and swiped it at the corpse of Quinn lying on the ground. Corpses immediately disappeared into ashes!

If you observe carefully, you can find that Quinn has crawled slowly from where he fell at this time, two meters away!

Looking at Allen, who was at a loss with the girl in his arms, Blade lightly said: “These things are useless just simply twisting their necks, they will soon recover!”

But at this time Allen didn’t want to pay attention to him, just looked anxiously at Gwen in his arms.

Blade’s edge glanced at Gwen and he coldly said: “She has been infected, and she will become such a disgusting thing after all. Let me kill her!”

With that said, Blade raised his katana sword to Gwen, and was about to swipe it down!

“Fuck, if it weren’t for you, Gwen wouldn’t have become like this!” Allen kicked Blade’s belly, a burst of blood spurted, and Blade flew a dozen meters away.

With a bang, Blade slowly slid down after hitting the wall, and there was no more sound.

Allen hated this troublemaker. Originally, he was trying to rescue Gwen intact. He didn’t expect the sudden appearance of this Blade man to make all the efforts of Allen wiped out, causing Gwen to be bitten by a vampire!

At this time, Harry flew over on the glider and saw Gwen trembling in Allen’s arms, and he said in surprise: “Allen, what happened, how could Gwen be like this!”

Hearing this, Allen fiercely said: “Kill that bastard, it was him because of which Gwen became like this!”

Seeing Blade fainting in the corner, Harry picked up a pumpkin bomb and was about to throw it over.

At this time, in the empty underground nightclub, an old man suddenly rushed in and shouted anxiously: “Stop, don’t hurt Blade, I can save that girl!”