“What the hell happened?” Kurama slowly opened his eyes, looked around, and finally locked his gaze on Ayr.

The former Kurama, who felt that he was divided into ninety-two Chakras by Sage of Six Paths, was invincible in the Hokage ninja world.

But unexpectedly, I met the legendary ninja, Senju Hashirama.

The other party said that he was too strong, and he used Wood Style Senju, holding him in one hand.

Just looking at it, he was directly caught by Uchiha Madara and treated as a pet.

It was later sealed by Uchiha Obito.

And then, Kurama’s invincible heart was wiped out.

But close to the story, Kurama can be sealed by the group and kept as a pet.

It’s not that Kurama is too weak, it’s that those people are too monsters! ! !

“Meeting Kurama for the first time, if nothing else, we will live together for a long time.” Ayr greeted him.

“Are you going to fight with my power?” Kurama’s eyes were fixed on Ayr.

For some reason, Kurama felt that Ayr was different from everyone else.

Give it a particularly approachable feel.

What Kurama didn’t know, however, was that he was 100% loyal to Ayr from the moment he was born.

“That’s not it, I’m just here to meet you.” Ayr spread his hands.

Kurama didn’t speak, just closed his eyes and crawled on the ground to sleep.

And Ayr did not continue to disturb Kurama, but moved all the jewelry on the pirate ship into Kurama’s spiritual space.

“These things are all for me?” Kurama asked, opening his eyes slightly.

Might as well put them in Kurama’s spiritual space, so that he can take out these jewels anytime, anywhere.

After Ayr left this sentence, he left Kurama’s spiritual space, and his consciousness returned to the cabin.

Looking around, I found that there was nothing else I wanted, and then I came to the deck.

“Next, where do I go to find Devil Fruit?” Ayr mused, resting his chin in his hand.

Although, at present, he has successfully found a Devil Fruit.

But…don’t forget, it took him a full year!

If you find a Devil Fruit in a year, it will take at least eight years to unlock the full power of Kurama.

During this year, Ayr has been fighting alone, searching for the illusory Devil Fruit.

If you create a pirate group… Ayr also has a hard time recruiting powerful companions.

Because at present, many strong people in the sea have already created their own pirate groups, or joined a huge pirate group like Rocks.

Even if Ayr does recruit powerful companions, there’s no guarantee he’ll be stabbed.

After all, people are unpredictable.

Since creating a pirate group, this method will not work.

Then there is only one other option.

That is to join a powerful pirate group!

In this way, it will be stronger when encountering an opponent, which can improve the progress of Sage Body.

There is a bigger chance to find Devil Fruit.

“Which pirate group should I join?” Ayr thought seriously.

Just as Ayr was thinking, there was a sound of current on the sea not far away.

I saw a huge ship, like a giant at sea, appearing in Ayr’s line of sight.

Living in this new age for a year, he saw the ship countless times in the news.

That’s right, it wasn’t other ships that appeared in front of him.

It is the ship of the soon-to-be-overlord of the seas, the Rocks Pirate! ! !

When Ayr noticed the Rocks Pirate’s boat, everyone on the boat naturally noticed him.

I saw a blond man standing on the bow with a cigar in his mouth and his arms crossed on his chest. Legendary pirates on the sea of ​​the future!

Today is one of the cadres for the Rocks Pirate.

I saw him staring at the sail road in front of him.

“Oh? I remember… This ship is the Anos Pirates, and the captain is a pirate with a bounty of 300 million Baileys.”

Glancing at the sails, Golden Lion focused his gaze on Ayr on the deck.

“Interesting guy, has this pirate group been wiped out?”

Beside the Golden Lion, there stood a tall, tall man with a broad chest and belly, with a white meniscus beard, and the momentum was like a tiger.

He is the future leader of the Four Emperors, Whitebeard! 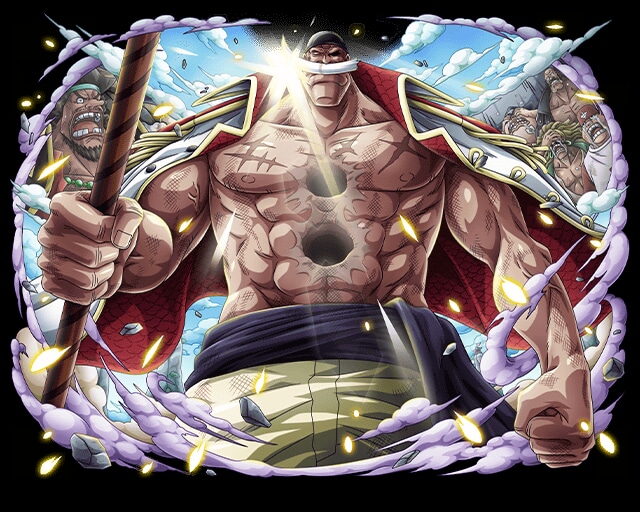 “It’s just killing a pirate of a 300 million pirate group. I can easily do this.” A man wearing armor all over his body and carrying a giant axe on his shoulders all the time, disdain.

He is one of the cadres at Rocks Pirate, Silver Axe!

At present, he is second only to Whitebeard and others in terms of strength.

“No, Silver Axe, he looks much younger than you. You may not be able to do such things at his age.” A woman with a graceful figure and a long body also stood curiously, bowed and smiled.

He was the Charlotte Linlin of her youth, and now she is a well-deserved beauty.

But…… the future of her, but her figure has changed greatly, and she has grown into a lump.

Charlotte Linlin noticed that Ayr was, at best, seventeen or eighteen.

At this age, it is possible to kill a pirate captain with 300 million Baileys alone.

Not everyone can do this kind of thing.

While everyone was discussing, a burly man with an ominous aura slowly walked over.

Watching him approach, even Whitebeard, Golden Lion and others obediently gave way.

Also the captain of the ship.

In the future, he will become the overlord of the sea and overwhelm the top powerhouse of an era!

Looking at Ayr on the pirate ship, Rocks grinned.