“Kaya, you aside, I have to transform once again.” Vegeta informed Kaya and others.

Luffy eyes started to shine. It is the first time he saw someone transform like this.

Usopp and Luffy both excitedly said.

After informing them, Vegeta gathers some strength and started to transform in Devil’s shape.

He choose to transform devil first, because it consumes almost nil energy, and also strengthen his body for about 3 times.

After transforming into the devil, he automatically starts to heal, but speed is just to slow, so he also starts the Pheonix ability simultaneously.

Nami patted her shoulder, and indicate her to calm down.

As soon as blue flames come, all the injuries on internal organs started to heal with naked eye speed.

His Devil’s transformation and Blue flames vanished, and Vegeta figure comes in front of other.

His body is fully naked, because devil fruit transform his body, not his clothes.

No-one notice this condition, until Vegeta put his hand on his black cobera and said: “Can anyone bring me some clothes?”

After hearing this sentence, Nami and Kaya face turns red. And they turned their head.

Usopp run into Vegeta room, and took some clothes to cover.

Luffy didn’t care about this, he is standing at the top head of the ship, and waiting for meat to come.

Vegeta is healed, but his body is without any strength now. He is also waiting for someone to cook meat for them.

Kaya is like a princess in her home, Nami is a thief, Luffy is an idiot, Vegeta know a little bit about cooking but has no strength.

Only Usopp who know little bit about cooking, but even with his cooking, Meat just taste superb.

After taking the Meat from Sea King Body, Vegeta already inform them that other sea king will definately come here after they get the smell or taste of blood.

So, we have to move away as soon as possible.

Everyone agrees about the suggestion, and they start sailing.

These two are Pirate Hunters, Yosaku and Johnny. They are previous friends of Zoro. 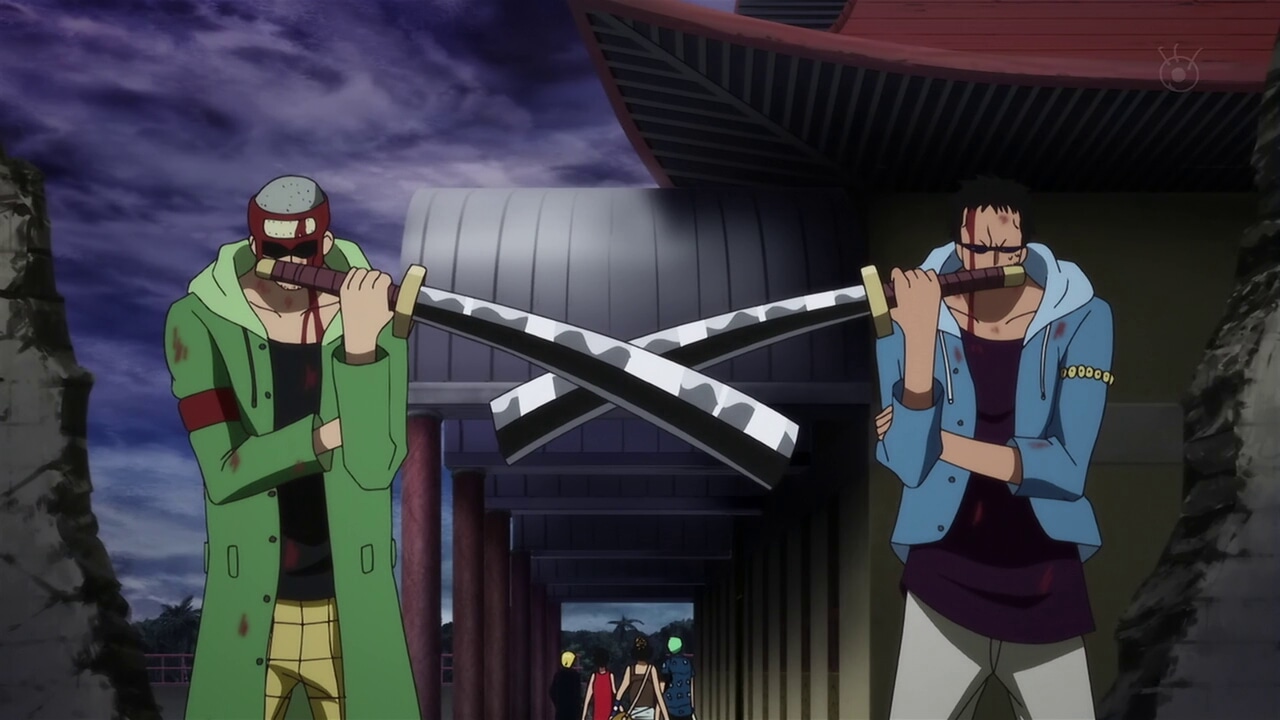 Party started, and everyone is enjoying.

Yosaku starts to tell Zoro about different powerful pirates in East Blue. In that, he mentioned Arlong Pirates.

After hearing the name of Arlong, Nami’s face turned white.

Nami stood up and went to her room. No-one notice her awkward behavior other than Kaya.

After eating almost everything, Vegeta didn’t care about the chitchat of Yosaku, because he already saw in the Anime.

So, he also went into one corner of the boat, and just slept there.

In mid-night, Nami opened her door, and walk out to the deck. Her eyes are filled with hesitation.

After hearing the name of Arlong, Nami remembers the her whole is waiting for her. She has to gave them their required Freedom.

Nami also wants to take her revenge on Arlong. Her mother was killed by him, how she forgive him like this.

Today’s attack of Vegeta, let her have some hopes for revenge. She wants to ask Vegeta to help her village.

Nami fears about the rejection. She sometime more feared that Vegeta agrees and at last killed by Arlong.

Nami just can’t bear to loose his friends, just like her mother.

Nami stood on the deck for a while, and after that she decided to not ask Vegeta.

“When I have the time, I will just stole their ship and treasure. With this treasure, I already have 100 million. I just pay this money to that fucking bastard, and take back my village.”

After deciding that, Nami look at the faces of Luffy, Usopp, Zoro, and Vegeta.

She turns around, and went into her room again.

“This is the last time, I will be traveling with my friends. After my this back stabbing event, they will naturally curse me, for whole life.”

Nami eyes are totally wet, and tears start to fall.

Next morning, everything returns to normal.

Vegeta starts his own training, Nami act like her usual self, Kaya is reading her medical book, Usopp is experimenting with something, Luffy is sitting on his usual position.

Vegeta feels some little bit abnormal behavior of Nami. Because today when he slap on Nami’s ass as usual, Nami didn’t say anything.

“When did my strength increases so much?” Vegeta really got shocked when he saw the panel.

His strength is almost triples from the moment he fight with Sea King.

Now his Armament Haki can cover both arms till his shoulders.

In happiness, he completely forgot about Nami’s odd behavior.

A Navy ship comes to the side, and a handsome man in Navy suit and beautyful lady standing.

After a little talk, Fullbody Lieutenant from Navy Headquaters ordered to sink them. Navy fired a cannon, and Luffy by mistake diverted it towards the Baratie restaurant.

Vegeta stood up and released his killing intent.

“If you once more attack my friends with or without reason, you will all die here.”

Vegeta voice a plain, and without any aggressiveness, but still everyone on the Navy Ship trembles.

After saying this, Luffy went to the restuarant to ask for forgiveness.

Luffy went to find the restaurant boss, and all other members sit on the desk to enjoy food.

Vegeta thinks about his previous behavior. He found that he is able to release a kind of killing intent from the body, which affects the mind of other person.

Maybe this is one of his power of Devil Devil-Fruit ability.